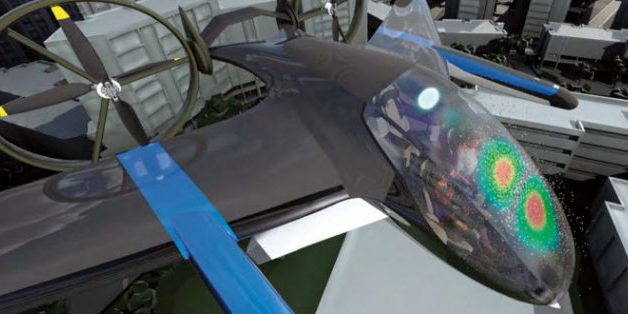 By the end of this century some 80 to 90 percent of the people on this planet will be living in cities, according to a report issued by the United Nations Department of Economic and Social Affairs. The current world population of 7.6 billion is predicted to reach 8.6 billion by the year 2030, 9.8 billion by 2050 and 11.2 billion by 2100.

Traffic everywhere is going to get a lot worse. Already today, every large urban center around the world—while providing amazing sights and cultural experiences—endures bouts of rush-hour congestion. The issue isn’t with any single vehicle, but with the entire system of vehicles and roads that connect city inhabitants to their destinations. Public transportation helps, but when you are adding 83 million new humans a year, the world is on track to a gridlock nightmare well before 2100.

How to address the challenges of ground-level urban transportation? One way is to move into the skies. Urban Air Mobility (UAM), aka the 3rd Aerospace Revolution, is a hot topic these days. Centered on Environmental Sustainability (electrification, low-noise, recyclable parts, etc.), the main ambition of UAM is to extend urban transportation from 2D to 3D by means of safe, clean and affordable concepts. This has caught the attention of aerospace and automotive industries around the globe, which are investing considerable time and funds into developing personal and/or air-taxi vehicles that will get people moving above the streets.

There are currently more than 50 companies developing UAM technology, with Uberplanning for initial air-taxi service in Dallas and Los Angeles by 2023. If you attended the Consumer Electronics Show (CES) this year, you saw exhibits from Bell, Volocopter, and SureFly, in addition to Dassault Systèmes.

Many of the air vehicles that leading companies (and some innovative startups as well) are introducing in the nearer term rely on hybrid-electric propulsion systems, since electricbattery energy storage technologies are still maturing. But the all-electric, Vertical Take-off and Landing (eVTOL) vehicle is the holy grail for everyone, given its low emissions and lower-noise potential, a winning combination in a crowded city. On a smaller scale, another important UAM application is unmanned air vehicles (UAVs), especially “delivery drones” that can help cut down on car traffic by bringing goods directly to the consumer’s door. Whatever the vehicle, while many of them share physical similarities with existing rotorcraft like helicopters and tiltrotors, they also have unique propulsion and guidance parameters dictated by the close quarters of urban space.

There are many challenges involved in designing such vehicles and proving out their robustness within the huge complexity of the urban environment. Multidisciplinary analyses need to be undertaken—aeroacoustics, aeromechanics, fluid-structure interaction (FSI) etc.—and strict performance standards (optimized over thousands of regulation-dictated flight miles) need to be met. The sheer volume of data involved requires highly integrated project management that empowers virtual prototyping and all-physics simulation on a collaborative platform. Let’s take a closer look at some of these challenges facing designers and engineers as they create aircraft mobility for the fast-approaching future. QUIETER, PLEASE!
A high priority for UAM is vehicle acoustic simulation. Cities throb and hum at all hours of the day and night and no one wants to add even more noise to all that with air vehicles. Uber made their position on this issue very clear when they stated, “We are going to bludgeon the industry about community noise, because that is the doorway to the market.”

If you were at the Science in the Age of Experience last year, or any of the regional users meetings, you probably saw the presentations from SIMULIA demonstrating how complex airflow comes off of a multirotor personal transport vehicle. There was also a video of an aircraft flyover simulation in which you could hear the simulated noise caused by the airflows (including engine exhaust) around a commercial airliner. A time-animated contour of noise over the land surrounding an airport let you hear what the aircraft would sound like to an observer on the ground.

Inherent to optimizing a vehicle’s flight path as it relates to noise is assessment of the altitude and velocity of the vehicle at every stage, i.e. takeoff velocity of 4 m/s until 50 feet, then adding 2 m/s forward velocity by tipping the rotors 3 degrees, and so on. This information is not only useful for minimizing noise, it can be input into subsequent analyses to maximize battery life, minimize wear, and support safety both inside and outside the vehicle.

Simulation becomes even more interesting when you consider the possibility of using Lattice Boltzmann Methods (LBM) that simulate the unsteady aerodynamics required to accurately understand noise sources and
propagation. These can be extremely useful when designing aircraft to be flown within a dense urban environment where noise is reflected through complex structures and terrains. In the long run, having fully optimized
paths like this would enable autonomous eVTOL aircraft.

The noise from a VTOL craft comes primarily from the impact of the main rotor blades with vortices shed from the preceding blades. This in turn is strongly dependent on the trajectory of the vehicle itself, which requires propulsion optimization, coupled flight dynamics, and aerodynamics and aeroacoustics simulations. The problem becomes even more complex when you consider that vehicles often have many rotors, some of which may be coaxial and counter rotating, often tilting and variable speed, resulting in complexity beyond the capability of traditional computational fluid dynamics (CFD) techniques. The more efficient Lattice Boltzmann techniques are available in SIMULIA’s PowerFLOW and XFlow today. If you will be attending the 75th annual forum of the Vertical Flight Society you will see our presentation on blade vortex interaction that shows the importance of incorporating deformable blades within the flow analysis.

Acoustics and aerodynamics are closely related in a rotorcraft. The simulated operation of complex mechanical systems such as the main rotors used in a VTOL is a hallmark of SIMULIA’s multibody dynamics solver, Simpack. This allows for integrated, very high fidelity simulations that are accurate into the acoustic range for gear transmission assemblies, and are also well suited for the analysis of complex flight control mechanisms.

Propulsion brings its own challenges, structural as well as acoustical. From the earliest stages of design, i.e. determining the optimal insertion of a fan stage in a duct, to optimizing the design of variable speed rotors over a large range of advance ratios and flow incidences, CATIA manages the parametric geometry models needed for the optimization cycles of propulsion units.

LESSONS LEARNED FROM AUTOMOTIVE
Every aircraft needs to be optimized for passenger comfort; here is where SIMULIA’s Reynolds-Averaged Navier-Stokes (RANS) CFD analysis methods, as well as automatic topology optimization, can address topics such as cabin ventilation via flow channels.

Passenger safety is everything, of course; the interior must protect the occupants from hard landings and other potential mishaps. Our automotive customers have been using the native SIMULIA explicit dynamics solver technology to address almost exactly the same internal physics problems that the designers of air vehicles are now looking at.

The goal is clearly to extend to this new airborne business the production paradigms employed by the car industry. Series production of fiber material structures is the main challenge in this respect; aircraft must be structurally robust as well as lightweight. SIMULIA has been the leader in composites simulation for the aerospace industry for more than a decade, since Boeing selected Abaqus in 2004 for commercializing the then state of the art VCCT composites simulation technology.

Advanced materials alone do not tell the full story. As any vehicle designer would say, it’s not how much material you have, it’s putting the material you do have in the right location. SIMULIA’s comprehensive topology optimization capability examines and sculpts components in an assembly in response to multiple nonlinear loads. Often times these topologically optimized parts look very organic, such as you would find in a bird (the ultimate VTOL user!). The technologies of SIMULIA and CATIA then work together to recraft such designs for manufacturability; even additive manufacturing limitations such as overhang constraints and support structures can also be addressed through these technologies.

BATTERIES AND ELECTRONICS
The battery is, of course, a critical energy source for these newer air vehicles. Inside each cell is a laminated composite material encapsulated in a gel matrix; mechanically this structure is not so different from an elastomeric bearing or tire, both industries in which SIMULIA has maintained a long record of success. Simulations here require the ability to solve thermal, structural, electrical, and chemical problems. For example, an analyst can use SIMULIA solutions to find out what happens when a metal spike is driven into a fully charged gel battery.

Full electromagnetic simulation of urban air vehicles is essential: All these low-flying aircraft need to reliably communicate and coordinate in order to safely operate in an air transportation system. Antenna placement will be an important factor so as not to interfere with the aerodynamics of the vehicle. In addition to antenna placement, there are issues of co-site interference, lightning strike, electromagnetic environmental effects, and more.

WORKFLOWS FOR URBAN AIR MOBILITY
These are just a few among many of the challenges the automotive and aerospace industries are tackling as they work to design urban air vehicles that will help solve future mobility on a crowded, urbanized planet. The powerful products, technologies, and features within SIMULIA are highly relevant to this exciting field. Dassault Systèmes has now gathered all these capabilities into a series of industry workflows, available on the 3DEXPERIENCE platform, that encapsulate the necessary physics and provide the proper tools for each stage of this process. Highlights:
• Dimensioning of lifting and propulsion systems
• Communication and detection system performance
• Vertical/horizontal flight aeromechanics
• Conversion aeromechanics and aeroacoustics
• Aircraft community noise
• System optimization
• Battery engineering
• Lightweighting
• Passenger comfort
• Safety

For Dassaults Systems products and solutions in Greece and Cyprus, contact us.