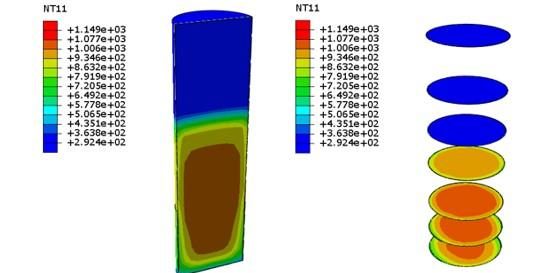 Li-ion batteries are widely used in cell phones as well as electric vehicles. Even though they are very convenient for every day usage, there is always a safety issue: thermal runaway. Thermal runaway occurs when battery chemical reaction releases energy that further increases the temperature, potentially causing destructive results. In case of overcharge or high temperature environmental conditions, there is high risk of thermal runaway with Li-ion batteries, unfortunately, due to their nature. Researchers and engineers are investigating very deeply on thermal runaway behavior in order to protect the life and assets of these batteries

Practically, the material properties of the battery for thermal runaway should be calibrated with the test results. For one cylindrical cell, the picture shows how the temperature evolves during thermal runaway.

Thermal runaway in an electric car can be very dangerous, but engineers have been working on developing methods of making these vehicles safer for passengers, reducing the effects of thermal runaway or at least slowing it so that the passengers can escape before fire or explosion occurs. It would be better overall, of course, to prevent thermal runaway from occurring at all. Simulation with Abaqus can predict the conditions that lead to thermal runaway, allowing engineers to better design batteries that can resist this potentially disastrous event.

*M.N. Richard and J.R. Dahn, “Accelerating rate calorimetry study  on the thermal stability of lithium intercalated graphite in electrolyte I. Experimental,” ,” J. of the electrochemical society, 146 (6) 2068-2077, 1999