An ancient artifact, dubbed the Antikythera Mechanism, was discovered in 1900 by Greek sponge divers who located a shipwreck at the bottom of the Mediterranean sea, near the Greek Island of Antikythera. The massive wreck is full of luxury items from Ancient Greece, and new treasures continue to be found through continuing expeditions. When the mechanism was unearthed, it was badly decomposed and its construction, functions and usage remained a mystery until recently when upon further inspection, researchers realized they had an amazing discovery in hand: the world’s oldest analog computer.

Dassault Systèmes is enabling the Aristotle University of Thessaloniki, which has an interest in Greek heritage studies, to further explore and develop the Antikythera Mechanism. Students in the university’s Department of Mechanical Engineering will use the 3DEXPERIENCE platform to digitally reconstruct the machine, and gain insight and skills into the design and development of athis high-performance mechanism.

So far, researchers have discovered that this extremely advanced mechanism could accurately calculate and predict astronomical events including the position of the sun, the phases of the moon, lunar and solar eclipses, and the paths of planets. 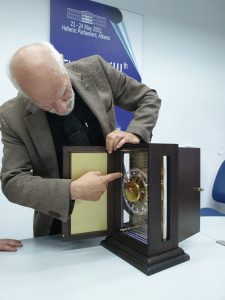 Using the 3DEXPERIENCE platform on the cloud, students in the Laboratory for Machine Tools and Manufacturing Engineering will digitally redesign the Antikythera Mechanism and further develop its function and operation.  Plans include integrating an additional gear system with motion and the pointer stars of five planets into a digital twin of the machine, creating the necessary data for manufacturing the mechanism parts, and simulating their real-world behavior.

By studying the Antikythera Mechanism in a virtual learning environment, Aristotle University of Thessaloniki students will be making a valuable contribution to Greek history, while at the same time develop the knowledge and know-how that employers seek in today’s workforce. The platform enables professors and students to create products, manage projects and engage in practical training with an interdisciplinary, real-world approach.  Students can master the same digital design, manufacturing, simulation and collaborative innovation applications that are used by industrial companies worldwide to design, develop and deliver new experiences to their customers.